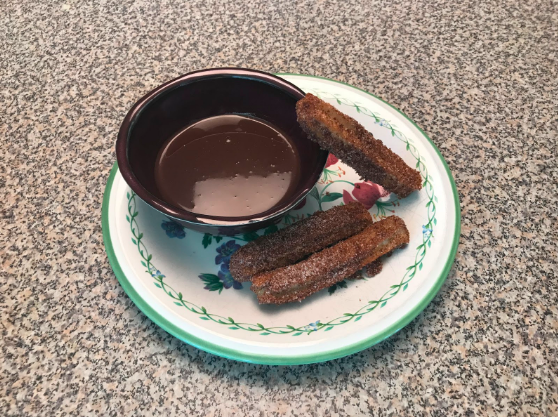 First of all, the ingredients that you will need are:

FOR THE VEGAN CHURROS:

FOR THE VEGAN CHOCOLATE SAUCE:

Mix 1/2 cup sugar with cinnamon in a flat bowl. Set it to the side. Line a plate with paper towels to use later with the churros.

In a small pot over medium heat, mix together the water, 1 1/2 tablespoons sugar, salt and 2 tablespoons vegetable oil with a whisk. Boil it and then remove it from the heat. Add the flour, mixing until it forms a ball.

Heat 3 to 4 inches of vegetable oil in a large, heavy-bottomed saucepan over medium-high heat until it reaches 375ºF (the frying temperature).

Put the dough into a pastry bag with a star-shaped tip.

Pipe the dough into the pot of oil in four inch strips, then using scissors or a sharp knife, cut it so it releases into the oil. Be careful! Fry them until they’re golden brown and cooked through. Put the churros on the paper towel-lined plate to cool down for a couple minutes, then put them in the sugar mixture.

Place the chopped vegan chocolate in a small bowl.

Warm the soy milk in a small saucepan without letting it boil. Pour the soy milk over the vegan chopped chocolate. Let it sit for 1 minute then stir to combine.