Why I Marched: A Perspective from the Women’s March 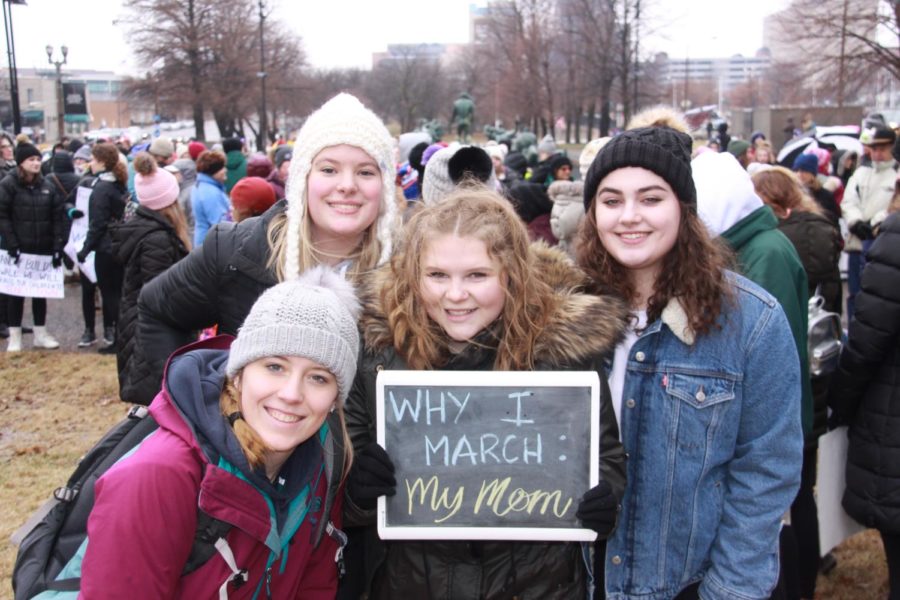 In January, I had the pleasure of attending the St. Louis Women’s March. I went with a large group of Nerinx girls, and even my little brother. As we were parading through the streets of Downtown St. Louis, a teenage boy came up to my friend and me, pushed a microphone in our faces, and asked us a very important question: “Why are you marching?”

My friend began by explaining the idea of equality, but was quickly interrupted. The boy asked us for specific places where we see inequality. In an effort to help, I tried to give an example. We were again interrupted by the teenage boy interrogating us. He began to ask us if what we wanted to do was fight. As this was a peaceful march, we replied no and walked away. Due to both the surprising and aggressive nature of the situation, I, along with many other Nerinx women, did not have the chance to form a well-educated and precise response. While the answer I gave is true, it is not the complete reason why I was bundled up, marching through the streets in 20 degree weather. I would like to take the time to inform you on exactly why I marched.

I marched for my sisters at Nerinx Hall. They have empowered me for the last four years, and continue to do so every day. Each woman in this school deserves the same respect as their male counterpart. The intelligence and creativity that pours from Nerinx is something that I believe is crucial to our identity. I marched for my teachers, a predominantly female profession, because they will never be paid enough. The teachers in this school inspire students to be the best women of tomorrow that they can be.

I marched for my mother who works tirelessly every day, and yet still does not gain the appreciation she deserves. My mom comes home each day and makes us dinner, washes the dishes, and makes sure that my dad, my brother, and I are happy and healthy. She deals with every bitter part of motherhood, and still manages to hold on to her unique elegance. I want to be just like her one day.

I marched because I am tired of hearing people tell women that they are overly emotional. I think nothing is braver than the ability to have sympathy and empathy, even if it is for yourself.

I marched for every time that I have been told to cover up because I am showing too much skin. I am sick of being told that what I wear will distract the males around me. It is not a reasonable excuse. A woman’s body should  not offend society any more than a male’s does, yet we are stuck in this stigma. So yes, I marched for my hemmed skirt. I marched because I should have the right to be in control of my own body. I do not believe someone who is not myself has the authority to tell me what is or is not best for my body.

There are so many other reasons that I marched, but I wanted to be specific, since that is what the boy who interviewed me asked. Most importantly though, I marched for those who could not. Whether that be because they live in a country where being seen as a woman is thought of as an inhibility, or because they could not make it downtown. I marched because every person has the right to equality in life, liberty, and the pursuit of happiness.